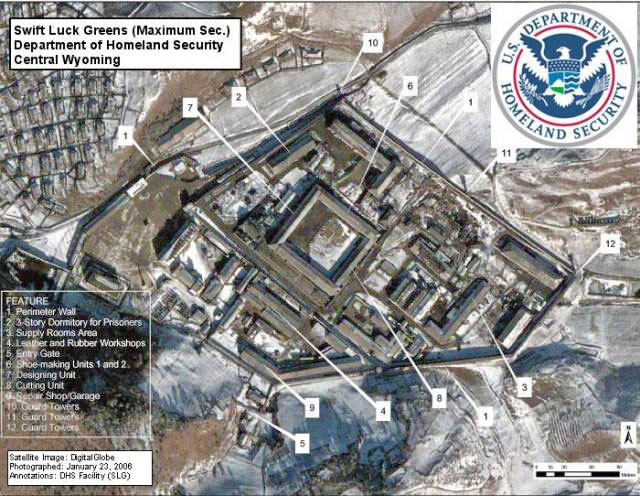 No access by road however, there is a railway system.

Ft. Chaffee Has a new runway for aircraft, new detention camp facilities with cap of 20,000 prisoners.

Blythville AFB This base was closed but is now being used as a camp location. New wooden barracks have been constructed at this location. This camp is surrounded by high wire topped with barbed wire, and has guard towers.

Vandenberg AFB Located midway between San Louis Obispo, and Santa Barbara. The base is on Hwy 1 and close to Hwy 101. REX 84 program, Emergency Custodial Facility.

Ft. Irwin Irwin is a remote Mtn region south of Death Valley, National Monument. This base is designated as inactive however, there is a concentration camp located at this facility about 30 miles from Interstate 15 in Barstow.

Sacramento Army Depot No specific data at this time.

Old Lowell AFB. Recently all new chain link fence was installed around the borders, plus 400,000 handcuffs and shackles were purchased by the government for this site.

Elgin AFB This base is greater than 50 miles long extending from Pensacola Bay to Hwy 331 in De Funiak Springs. It is adjacent to Interstate 10 on the North and the Fort Walton Beach vacation spot.

Unadilla, Ga Macon County; Located on east railroad street, Plunket road leads into the facility 1 1/2 miles from Unadilla on county road 230. This is a FEMA prison manned and staffed but no prisoners.

Oglethorpe, Ga. Macon County; facility is located five miles from Montezuma, three miles from Oglethorp. Traveling south on highway 49, located on the west side of the highway. This FEMA prison has no staff and no prisoners.

Morgan, Ga. Calhoun County; I-75 exit 32 to 300 south to Albany. Take highway 234 to Morgan. Go through Morgan taking highway 45 south. The FEMA facility is 1 1/2 miles on the right (west) side of highway 45. This FEMA facility is fully manned and staffed but no prisoners.

Abbeyville, Ga. Wilcox County: south side of Abbeyvilleon highway 129 (Broad Street) off highway 280 (Main Street). This FEMA facility is fully manned and staffed but no prisoners.

McRae, Ga. Telfair County; 1.5 miles west of McRae on highway 134 (8th street). The FEMA facility is on Irwinton Ave. off 8th street. This facility is fully manned and staffed but no prisoners. 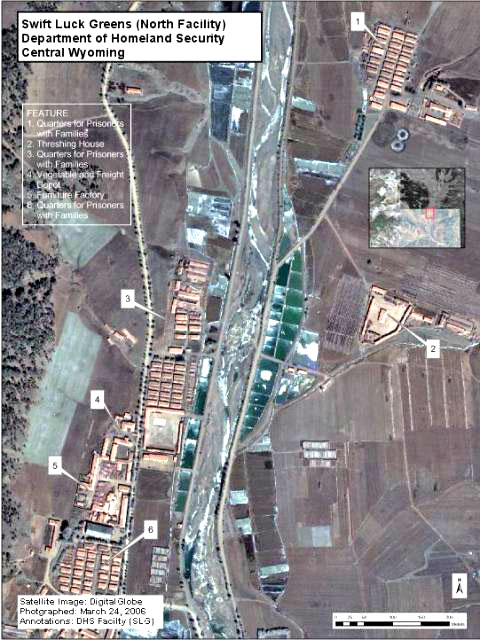 Moose Creek Unmanned and there is a near by landing strip in or near a national forest.

Marseilles It is located on the Illinois river off Interstate 80 on Hwy 6. It is a relatively small facility with a cap of 1400 prisoners.

Though it is small it is designed like other concentration camp facilities with high fences topped with barbed wire and guard towers.

Thousands of acres located just out of Indianapolis, Indiana holds a large Concentration camp facility complete with barracks, high fence, razor wire, towers, turnstyles, a railroad, helicopter landing pads, and what appears to be three large furnaces with 3inch mains on one of the buildings. This is a massive facility, still under construction with a completion date sometime in 1996.

Ft. Benjamin Harrison A U.S. Army facility located on the outskirts of Indianapolis will be used to hold prisoners.

Richards Gebaur AFB This facility is located in Grandview, A large civilian internment facility has been built on this facility, and base personnel are restricted from the area.

Kincheloe Correctional Facility (Formerly Kincheloe AFB with B-52 sized runways). Has five large prison buildings able to house 5000+. The facility has about 500 prisoners at this time. Location: 20 miles south of Sault Ste. Marie (Soo Locks) at the eastern end of the Upper Penninsula of Michigan.

K.I. Sawyer AFB Large construction program has been going on under the name of "Operation Gateway". High security is in place with a large portion of the base closed to civilian view. Location: 20 miles south of Marquette, MI in the Upper Penninsula of Michigan.

Raco Field Raco field is an interesting facility. The above ground runways form a perfect triangle. Few buildings appear on the surface, but ventilators can be seen. Civilian workers report that a subsurface facility exists. No publicity exists indicating what the role of Raco Field is, although something is there. To observers, it is an "inactive WWII base." Location: 15 miles NW of Kincheloe Correctional Facility on Hwy 28.

Bark River A large construction operation is ongoing in the Bark River, MI, area. Locals are tight-lipped. The facility is off the main highway in a wilderness area. While most of the locals say that the construction is associated with the ELF (extreme low frequency) project of world-wide communications, others suspect FEMA is involved. (Note: the ELF grid is located 100 miles NE of the Bark River area) Location: 20 miles west of Escanaba in the upper penninsula of Michigan.

Hancock County - The NASA facility at this location has two camps the first being located at the end of Kiln road at Waveland, and then the next road after ammo road at the Post Office.

The second camp is located in the center of a rest station back from the Interstate.

Inmates from the Hancock County jail claim they have worked details involving the delivery of food to these camps under the supervision of U.N. Guards.

Elco There is a prison facility 10 miles out of Elco.

Winnemucca Camp is located at the I-80 mile marker 112, on the south side of the road and 3/4 miles off of the road.

Wells/Winnemucca Camp is located near the base line of the mountains. Reno Nevada plus 150 miles east south side of road if your headed west, 150 yards off the road.

Ft. Drum located in upstate New York, probable location for Eastern area processing of people, located near the St. Lawrence river and access to Lake Ontario. Both waterways may be used for transport. Located very close to Canada.

Oklahoma City Tinker AFB, This is a civilian detention facility, all base personnel are prohibited from going near the area, and the area is under constant guard.

Will Rogers Air Port This is a newly constructed FEMA facility, and it is believed that it will be used as a primary processing center for prisoners West of the Mississippi River.

Millard County - Central Utah - Renovated WWII Japanese-American special internment detention facility.
Skull Valley Camp William property - west of the old bombing range South/southwestern portion of Camp Williams This camp was discovered by a man and his son who were rabbit hunting, they were discovered and apprehended.

Utah Lake 15 miles south of Saratoga Recreation center 200 - 300 yards off the road Black wire 40 to 50 feet tall, made to look something like a golf driving range.

Okanogan County borders Canada and is a site for a massive concentration camp capable of holding hundreds of thousands of people. 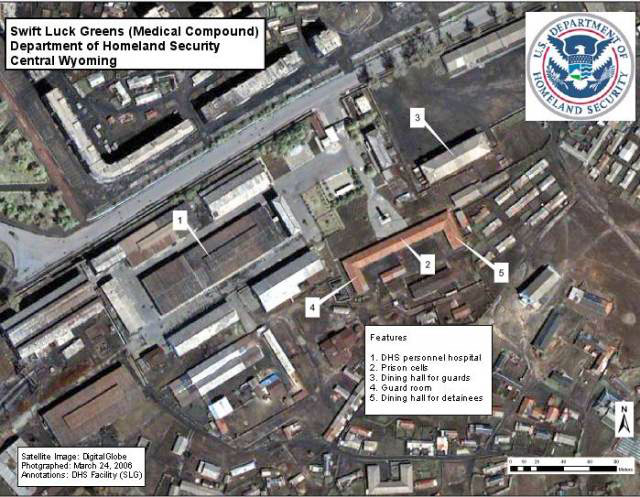